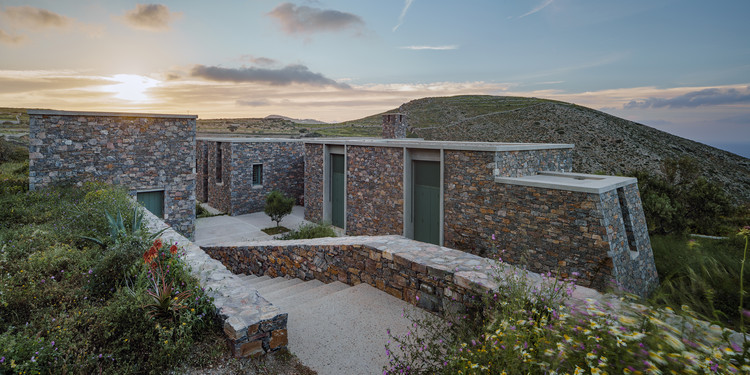 Text description provided by the architects. Located near the Chora of Folegandros Island, the holiday home is built on a steep slope that opens up to the Aegean Sea view. The building breaks down into smaller volumes to respond to the context of the adjacent historic settlement, characterized by small-scale cubic structures. The four volumes of the house respectively accommodate the separate programmatic units of the living room, kitchen, bedroom and guest house.

The opening spaces between these monolithic volumes create a network of thresholds, exterior and semi-exterior spaces. A wooden balcony, coming from the entrance and developing as an extension of the living room, hangs over the rocky terrain, denoting the northeastern views of the island. Likewise, between the kitchen and the living room, between the two, a transitional space is created which opens to the west and introduces a space for eating and meeting.

The design and development of the surrounding landscape aims to have the least possible impact on the plot and the local environment. A smooth ramp organizes the descent from street level to the house, which leads to a small square and an entrance hall, which the surrounded built volumes protect from the strong Aegean winds.

The need to organize outdoor spaces protected from the wind led to the introduction of a series of micro-spaces, seating areas and corners, like the outdoor dining area, to the west of the kitchen volume. In the project, taller stone walls achieve these goals and the best environmental performance. Similar structures, high drystone walls, can be found all around the island and these were part of ancient methods of protecting sensitive fruit trees and increasing their humidity.

The materials used were chosen on the basis of their durability in particularly harsh climatic conditions and their ability to adapt as well as possible to the landscape. A local gray stone was used, while uncoated and unpainted concrete defined secondary elements. Overall, the volumes seem to be born from natural soil. The wooden elements are painted in olive green further enhancing the integration of the architecture into the landscape. Due to its location, the project is visible from the main road of the island. Consequently, the treatment of the â€œfifth facadeâ€ of the house, that is to say of its roof, took on particular importance. All the flat terraces are covered with local shingles, unifying the volumes with the stones and the local vegetation.