Check Out a Mountain Resort Close to Downtown Los Angeles, by Travel Writers

“Looks like a resort,” a friend said as we drove past the town square in Sierra Madre, California. It was lined with umbrella tables, cafes, restaurants, an ice cream parlor, a pub, shops and, down a side street, a cozy microbrewery. At the foot of the San Gabriel Mountains beneath the Angeles National Forest, this small, 3-square-mile, tree-shaded town looks like it was plucked straight out of New England. Hard to believe it’s only 30 minutes from downtown LA.

But locals here don’t consider their quiet village at the foot of the hills a vacation spot, even though the town presents what travelers look for when seeking rest and relaxation: good weather, peaceful scenery, friendly people. , history, period architecture, shopping and restaurants.

To tell the truth, my friend was not off the mark at all.

By the end of the 19th century, this wooded region was the most popular of a handful of hill stations established by East Coast pioneers eager to rebuild their lives in the rejuvenating Mediterranean climate and wide open spaces of Southern California. . Nathaniel Carter, originally from Massachusetts, was one such pioneer. He had come west to recover from a lung disease because the healthy mountain air was known to help people with debilitating respiratory illnesses. In his book “The Southern California Story: Seeking the Better Life in Sierra Madre,” author Michele Zack colorfully describes the city’s history, stories, and characters.

After Carter recovered from his illness, he stayed, started a new career in real estate, and lured the wealthy East Coasters west. In 1881, he founded the Sierra Madre (Spanish for “mother range”), nicknaming it Mother Nature’s sanatorium. It was incorporated in 1907.

This period became known as the Great Backpacking Era, when long prairie dresses did not prevent women from hiking the dirt trails to camps such as Sturtevant Camp Resort. Established in 1892, it is the last surviving resort camp with furnished guest cabins, a mess hall, an industrial kitchen, a recreation area and an outdoor chapel that still welcomes hikers.

At Mary’s Market in the Sierra Madre Canyon neighborhood north of Kersting Court, I met Joe Tortomasi, a longtime resident who frequently hikes the roughly 4-mile trail to Sturtevant Camp.

In the secluded, labyrinthine canyon under an ancient sycamore tree, the century-old Market of Mary is a remnant of the region’s frontier days, when it was the center of the Sierra Madre. After periods of closure, Mary’s is buzzing again. As visitors walk through the tiny restaurant’s screen door, they’re taken back in time as owners Heather Everett Morrison and Jenny Kay serve delicious meals and sell trinkets, collectibles, t-shirts and cards postcards from Mary’s Market.

And while researching his family history, Tortomasi was shocked to learn that he had roots in the Sierra Madre long before he moved to the canyon.

“You have to come here,” remembers Tortomasi, the librarian told him. She had discovered a local newspaper from 1908 with an advertisement that read “Alfonso DeMaio’s Shoe Repair”. DeMaio was Tortomasi’s grandfather.

Tortomasi also showed me the building on Sturtevant Drive where Anais Nin, the French author, poet and columnist, lived for over 10 years when she was (illegally) married to a forest ranger while she was (legally ) married to her first husband in New York. .

Indeed, once someone falls in love with the Sierra Madre, it’s hard to leave. The multi-generational families and businesses here bear witness to this.

As the third and fourth generations of E. Waldo Ward & Sons who carry on the vision of founder Edwin Waldo Ward Sr., a New York luxury food seller who came West and bought a citrus farm to make marmalades and other foods gastronomic.

New Jersey native Karen Keegan, founder of Savor the Flavor, witnesses the next generation of her popular specialty food and gourmet gift shop that opened in 1998. As she scouted homes in nearby towns , she and her husband came across the Sierra Madre – where their search ended.

“Sierra Madre is magical,” Keegan said. “It’s special as soon as you arrive.” In a recent move across the street, the “reincarnated” Savor the Flavor takes up a larger space and is now owned by Keegan’s daughter, Madeline Romo. Gourmet foods and hand-selected gifts are the mainstays, along with new twists from Romo “to have something in store for people of all ages.”

For a quiet town, it is famous for festivals and holidays. After COVID-19 forced its cancellation for two years, 2022 has been the return year for the historic Sierra Madre Wisteria Festival, held every spring since 1931. Who knew a 75-cent cup of wisteria would enter the Guinness Book of World Records largest flowering plant in the world and be one of the seven horticultural wonders of the world? The event draws thousands of people to the village each March to celebrate the vine in full bloom.

The varied landscapes of this Los Angeles enclave have also served as a setting for filmmaking over the decades – from the 1956 sci-fi film “Invasion of the Body Snatchers” to the funeral episode “Twin Peaks” at the Pioneer Cemetery on HBO’s season 2 “Big Little Lies,” when scenes filmed in the canyon and Starbucks at Kersting Court doubled for the California coastal town of Monterey.

The Sierra Madre is as bucolic and happy today as it was in pioneer days. It attracts day-trippers from all over Southern California, where hiking and a slower pace are always on the cards.

To find out more about the Sierra Madre: www.cityofsierramadre.com

At the foot of the San Gabriel Mountains, beneath the Angeles National Forest, lies the pioneer town of Sierra Madre, California, founded in 1881. Photo courtesy of Athena Lucero. 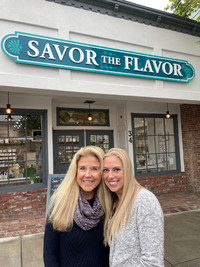 Karen Keegan and her daughter Madeline Romo are respectively the founder and current owner of specialty food and gourmet gift shop Savor the Flavor, one of the most popular businesses in the Sierra Madre. Photo courtesy of Jim Manoledes. 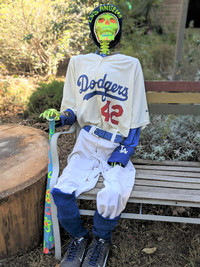 Halloween is a big holiday in Sierra Madre, California, when its annual scarecrow contest draws crowds as goblins come out of the woodwork all over town. Photo courtesy of Athena Lucero.